The American Flag should be treated with the same respect we would afford any national symbol. Therefore, we do not really dispose of a flag; instead we retire it from use and burn and bury it. There are specific guidelines for this, and numerous organizations who provide assistance. 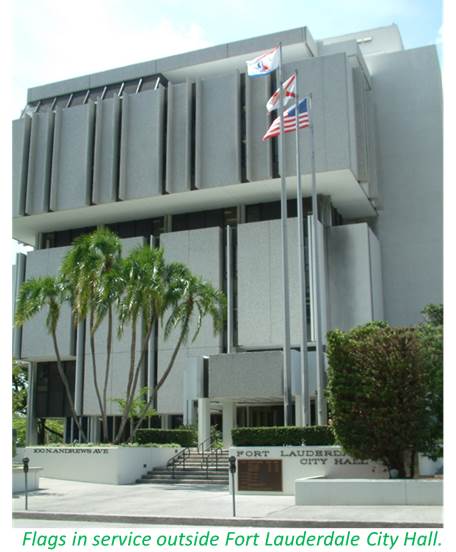 The "Ceremony for Disposal of Unserviceable Flags" was approved via Resolution No. 440 by the National Convention of The American Legion at its September,1937 New York meeting. At that time, most American flags were made of cotton or wool. The burning of these materials, while not entirely without noxious emissions, is not of great concern in limited quantity.Today, however, many flags are made of nylon or other synthetic, petroleum-based materials. Burning these materials is of concern as known toxins and carbon-based emissions are produced.

The information presented here reviews the traditional steps for retiring an American Flag. There are limited options at this time for recycling flags in a dignified manner, but there is a growing movement and some testing being done. As we become aware of reputable options we will update this page.

Actually, flags have been "recycled" for over 100 years. In the 19th century it was popular for women to dismantle worn flags, reserve the usable parts and piece them together to create new flags. Some local organizations continue this practice today.

Before considering traditional retirement of a flag, remember that torn and worn flags can be mended and put back into service. They can also be cleaned when dirty. Just be sure that any stitching keeps the original proportions of the flag.

Another choice is to present the flag as a keepsake to someone for whom it has special meaning. Be sure to fold the flag in the customary manner. You might also consider placing the flag in a special triangular shaped box easily found online, at military goods outlets and even at some art supply stores. When you deliver the flag to the chosen individual, be sure to explain why it is being presented and ask the person whether he is willing to take responsibility for it.

Resources to Assist You

If your flag is in usable condition, or only needs minor repair, please consider donating it. A local Veteran's of Foreign Wars (VFW) Post, American Legion or other active veteran's association may be able to assist you. Please contact them directly. Local Boy Scout and Girl Scout troops also often provide this service, or can take care of proper disposal. Some flag supply companies accept old flags for retiring from their customers.

Size does not matter. Whether your flag is handheld, standard, or the size of a building, it should be treated with the utmost of respect.

Condition does not matter. Even if your flag is weather worn, with ragged edges and holes, it should still be retired properly.

Flags should be distinguished from items with images of flags on them. Items such as bunting, party decorations, cocktail toothpicks, paper goods, stickers, blankets and towels, clothing and so forth, do not need to be retired. Please donate gently used or unused items to the organization of your choice, and follow general disposal guidelines for the type of item.

Some items closely resemble flags, such as scarves. When in doubt, treat the item as an actual flag.

According to the VFW, there are generally recommended steps for proper disposal of a flag. The process involves burning of the flag's remains and burial of the ashes. Please make sure you are conforming to local/state fire codes or ordinances. You can also request the your local VFW post, American Legion, or scouting troop take care of these steps for you. Sometimes, you can be present, if you like.

Here is a process that you can follow. This process is a compilation of several sources and captures the general spirit of a respectful Flag Retirement Ceremony.

Some people may have concerns about burning of a flag. The United States Flag Code (US Flag Code. TITLE 4 > CHAPTER 1 > Sec. 8(k)) states: "The flag, when it is in such condition that it is no longer a fitting emblem for display, should be destroyed in a dignified way, preferably by burning." While no specific procedure is cited, the assumption is that it should be done "in good taste and [with] no disrespect to the flag."

While not as commonly known, many States have guidelines for display and disposal of their flags. In general, State flags should be afforded the same respect and dignity as the U.S. Flag. The State of Florida statute on Flags, Title XVIII, Chapter 256, does not make mention of retirement. The City of Fort Lauderdale has no official policy on disposal of the municipal flag.

Retiring Flags of Other Nations

Please contact the consulate of the nation in question to inquire about proper methods of retiring another nation's flag. Please DO NOT follow the instructions for burning and burial given here without consulting a knowledgeable country representative first. In some cultures, the burning of a flag under any circumstances would be highly offensive.