Even though Fort Lauderdale is an urban environment, we live alongside a great variety of wildlife. They range from commonly seen animals such as squirrels and raccoons, to potentially surprising visitors such as tortoises and possums. It is important to know that these animals are not out of place and they are not pests-- not even the snakes you may see! Each has its place in our ecosystem, and each requires our respect and protection.

Tortoises and turtles are both shelled reptiles, with one very important difference: tortoises live on the land and turtles live primarily in the water. The Gopher Tortoise is the only tortoise found in Florida, and we see it right here in Fort Lauderdale. Try to spot them in Hugh Taylor Birch State Park and Fort Lauderdale Executive Airport.

Knowing how to identify a tortoise is important, so that it does not end up in the wrong habitat.

Like turtles, tortoises can have long lifespans ranging between 40 and 60 years-- just a blink of an eye compared to how long the species has roamed our planet. The Gopher Tortoise is considered a "keystone species" meaning that it can be traced back through the millennia, even 500,000 and 2 million years. Now, its existence is threatened, primarily from development encroaching on their habitat and illegal hunting.

Why should we protect the Gopher Tortoise? Because it is vital to the survival of other animals that are essential to balancing the ecosystem. According to the Florida Fish and Wildlife Conservation Commission, over 350 animals use tortoise burrows, including burrowing owls, Florida mice, indigo snakes, opossums, rabbits, gopher frog, eastern diamondback rattlesnakes and gopher crickets. 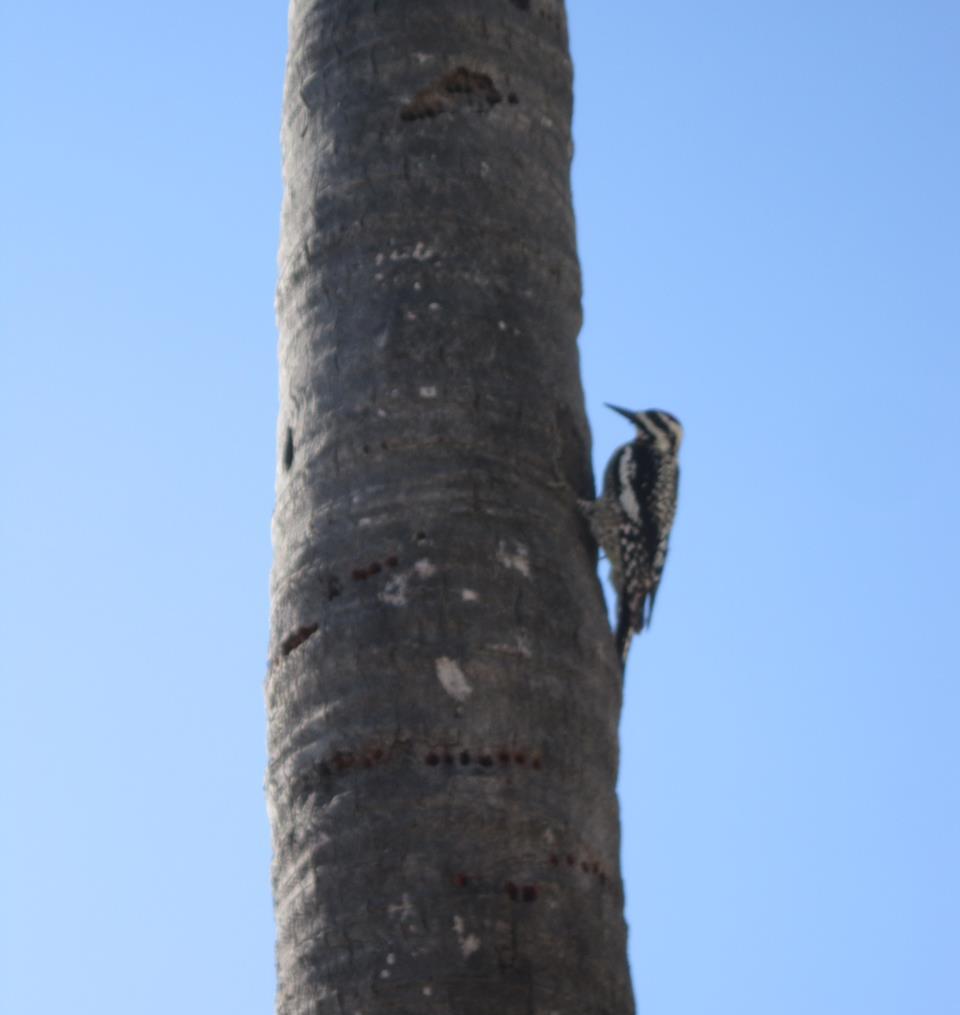 You will know if a woodpecker has been in your tree by their trademark circular cavities created by their strong bills. Woodpeckers use these holes for shelter and to find food such as sap, insects, or nuts. There are seven different species of woodpeckers in Florida and up until recently there were eight. The Ivory-Billed was last seen in 1969 and is now considered extinct. Common woodpeckers are the Red-Bellied, Downey, and Common Flicker which can be seen in parks and wooded areas like Snyder Park.

Woodpeckers are often perceived as pests that cause damage, however they are actually very beneficial to home and business owners. Think of them as investigators with wings! They will find openings and can identify where insects (like termites) are in your home. You will know if you have a problem if woodpeckers are hanging out by the eaves and fascia of your home. They may make noise but like all animals you want them for balance in the natural food chain.

Small mammals do us a great service by feasting at critical parts of the food chain. By consuming seeds they help to pollinate native plants. By eating bugs, such as roaches, they help control unwanted pests. And by eating over-ripe fruit, they remove waste from our environment. And by eating weeds, they encourage native plants to flourish. While small mammals, like squirrels, have adapted to urban life, others, such as the opossum, may need a bit more of our help.

Look for these small mammals in parks, marshes and mangroves, and even in back yards.

It is no secret that reptiles enjoy the warm Fort Lauderdale weather as much as our neighbors do. Snakes are a common animal found in many backyards and parks. While their appearance may be intimidating, only six out of the 44 snakes found in Florida are venomous, including the eastern coral snake, the southern copperhead, the cottonmouth, the eastern diamondback rattlesnake, the timber rattlesnake, and the dusky pygmy rattlesnake. Snakes, like many animals are a vital part of our ecosystem eating rodents, insects and other small animals. If you see a snake, leave it alone and observe from a far. They will generally leave you alone if they are not provoked.

If you find a wild animal...

Keep your distance. They are lovely to look at, but can be very dangerous to hold. Follow our guidelines if you think an animal is in distress or if you spot what you think is an exotic animal in the wild.

The Florida Fish and Wildlife Conservation Commission is a state agency that works to preserve and protect Florida's native wildlife, fresh, and saltwater fish. They have an extensive website with information on everyhing from conservation to trails to handling nuisance animals. Start with profiles of the animals, including the: gopher tortoise, woodpecker, squirrel, opossum, marsh rabbit, and raccoon.

Broward County offers advice on what to do if you find wild visitors to be in the the wrong place, such as your attic, or if they become a nuisance.  Check their Nuisance Animals webpage for information on securing your garbage and discouraging wildlife from certain areas.

The Audubon Society's Field Guide to Birds of North America is a wonderful source for identifying and learning about the many wonderful birds that visit or live in our area. Use the "key word" woodpecker to get information on all 16 varieties! Visit the Florida Museum of Natural History’s Identify a Snake tool to classify a snake if you come across one in your backyard, or view their List of Florida Snakes.