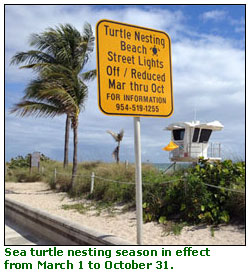 Fort Lauderdale Beach is a year-round destination for millions of neighbors, residents and visitors. However, from March 1 through October 31, sea turtles, particularly green, leatherback and loggerheads, make their way to nest on Florida's inviting beaches, including Fort Lauderdale Beach.

Loggerhead turtles are the most common sea turtles that nest in Florida. Loggerheads are listed as a "threatened" species, which means they are likely to become endangered in the future.

Green and leatherback turtles also nest on Florida's beaches. Both of these turtle species are listed as "endangered," which means they are in danger of extinction in the future.

Although hawksbill and Kemp's ridley turtles enjoy Florida's waters, they generally do not nest on its beaches. Hawksbill turtles are a critically endangered species. In Florida, they are typically spotted in the Florida Keys and along the central Gulf and southeastern coasts. Kemp's ridley sea turtles are the rarest of the five turtles that frequent Florida's waters, and they are the most endangered in the world. Typically, the Kemp's ridley nests on Rancho Nuevo Beach on the Gulf coast of Mexico.

Natural predators, environmental factors, and humans directly and indirectly threaten sea turtles. Obstacles to their survival include: stolen eggs; artificial lighting; coastal development; hunting; marine litter and pollution; beach furniture and maintenance activities; and natural erosion. However, there are many procedures and educational programs in place to conserve and protect these beautiful sea creatures. 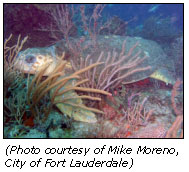 No person may take, harass, harm, pursue, hunt, shoot, wound, kill, trap, capture or attempt to engage in any such conduct to marine turtles, turtle nests, and/or turtle eggs.

Any individual who knowingly violates any provision of the act may be assessed civil penalties up to $25,000 or a criminal penalty up to $100,000 and up to one-year imprisonment. If you see someone harassing a sea turtle or poaching a nest, please call the Florida Fish and Wildlife Conservation Commission (FWC) at 1-888-404-FWCC (3922).

In addition to the national and state laws, the City of Fort Lauderdale adopted Chapter 6, Article III. - Sea Turtles of its Code of Ordinances to help protect threatened and endangered sea turtles that nest and hatch on the beach.

This ordinance, which aligns with Chapter 62B-55 of Florida's Administrative Code, is designed to reduce the impact of artificial lighting on sea turtles by restricting it during both the nesting and hatching season (March 1 - October 31).