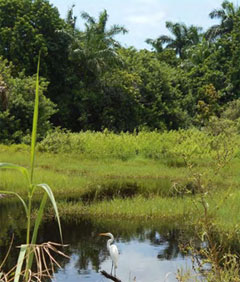 A stormwater preserve is a natural area that serves four purposes at once: (1) cleanse and store urban stormwater to recharge the aquifer, (2) protect and recover native habitats, (3) provide a public space for recreational use, and (4) support neighborhood livability. It is an excellent example of sustainable urban development. Fort Lauderdale is planning several stormwater preserves in areas that have historically been prone to flooding. The River Oaks Preserve is one of the first.

As is common among older neighborhoods, most of the development in River Oaks happened prior to modern water management technologies were available or required, and some subsequent road construction was done without evaluation of stormwater flow. As a result, River Oaks was subjected to repetitive and worsening flooding. Now the City is on track to reverse this problem. An $800,000 grant is being used for development of a stormwater preserve on 9.1 acres of undeveloped land in the area. In addition, the City, in conjunction with the Florida Department of Transportation, will relocate the nearby historic railroad bridge to span a created water or wetland feature, thereby reaping the benefits of two complimentary projects.

In 2007 the City met with the Broward County Environmental Protection Department and garnered support for the development of a new outfall that would restore historic flow paths and reconnect the River Oaks area to the South Fork of the New River. Plans were to reestablish the outfall, and connect a new stormwater system to it. The Stormwater preserve is an important part of that system. On September 21, 2010, the City Commission accepted the grant from the Florida Department of Environmental Protection (FDEP).

To date, the City has purchased the property; conducted public meetings; completed stormwater preserve design; issued a request for bids for restoration construction; completed construction on the site to restore its historic elevation; and, completed permitting.  Relief from flooding has already been reported from the removal of fill on the site.

The goal of the project is to preserve and enhance existing forested wetlands and to restore herbaceous wetlands to a "filter marsh community." The land will be designed and permitted for storage and treatment of stormwater flows thus it will both improve stormwater quality and alleviate flooding. Even at high tide, when discharge to the New River slows or becomes impossible, the wetlands will be able to hold stormwater and allow it to percolate naturally into the ground. This will not only funnel water to the Biscayne Aquifer, and help mitigate saltwater intrusion, but also reduce the amount of stormwater discharge to the New River during typical rain events. The wetlands will also provide water quality benefits and serve as habitat for native flora and fauna and an oasis for migrating birds.