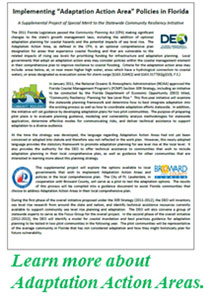 and that are vulnerable to the related impacts of rising sea levels for the purpose of prioritizing funding for infrastructure and adaptation planning."

Once implemented, the policies and protocols which result from AAA designation promote resiliency.

In 2011, the Florida State legislature passed the landmark Community Planning Act (“CPA”). The CPA implemented the most sweeping change to Florida’s growth management laws since the passage of the 1985 Local Government Comprehensive Planning and Land Development Regulation Act. The CPA permits a local government with a Comprehensive Plan Coastal Management Element the ability to include a plan for sea level rise impacts. Specifically, this climate change/sea level rise adaptation allowance provides local governments the option of developing an adaptation action area designation with associated policies for those coastal zones vulnerable to rising sea levels in order to guide prioritization of funding to improve resilience. For more information visit the FDEO.

Also in 2011, the National Oceanic & Atmospheric Administration approved the Florida Coastal Management Program’s Section 309 Strategy, that included an initiative to be conducted by the Florida Department of Economic Opportunity titled, “Community Resiliency: Planning for Sea Level Rise.” This initiative will provide guidance for sea level rise adaptation by developing an adaptation plan for a pilot community.

In 2013, due to being an advanced community on the forefront of adaptation planning in Florida that is ready to take on highly targeted tasks related to adaptation action areas, the City of Fort Lauderdale, in conjunction with Broward County, was requested by the Florida Department of Economic Opportunity to serve as the Project of Special Merit pilot for this effort. The City was selected due to our extensive involvement with the Southeast Florida Regional Climate Compact, a partnership between Palm Beach County, Broward County, Miami-Dade County and Monroe County. The Compact was instrumental in providing the support necessary to get the adaptation action area language adopted into the CPA. In addition, the Compact has made significant progress with setting parameters for data and analysis regarding sea level rise vulnerability in the region. While serving as a pilot community to test the development and advancement of adaptation policy options, the City Commission provided final approval to amend the Comprehensive Plan's Coastal Management Element and Administration Element to incorporate AAA policy, objective and 14 policies in 2014.

In 2015, the City's Community Investment Plan included a new AAA section which includes the identification of the first 16 AAAs and 38 projects identified for funding within those AAAs.

Building upon the City's leadership in the area of sustainability, the use of AAAs is another tool that is being integrated into operations to combat coastal flooding and reduce risk to rising sea levels.