Temperatures do rise and fall over time. When viewed year-to-year, fluctuations are common. In our City’s history, we have experienced both extreme heat and surprising cold: a record high of 99°F in 1980 and the record low of 28°F in 1977. What gives us pause now is not the actual temperature in any given year, but the average temperature when viewed over time. It definitely is hotter than it used to be—globally and locally—and the number of days when the temperature varies dramatically from the norm is increasing. 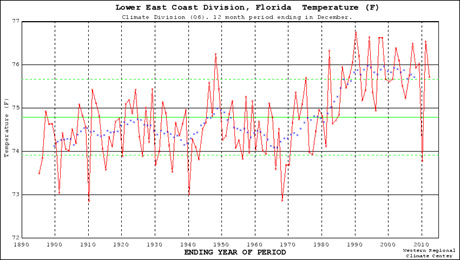 According to NASA’s Goddard Institute of Space Studies (GISS): “In total, average global temperatures have increased by about 0.8°C (1.4°F) since 1880.” In Fort Lauderdale, we have trended the same way since the turn of the 20th Century, though not at the same pace. Unlike most of the country, which can trace the changes to the dawn of the Industrial Revolution, our region has experienced most of its warming since the 1970s, and it has not been a straight upward climb. There have been periods of warming and cooling in our City, such as our last major warming between the mid-1960s and the early 1990s. At about the same time, the heat also began to last longer. In our area, the hot season is now as much as three weeks longer than it was around 1950.

Why is temperature changing in Fort Lauderdale?

Our region historically has been in a “warming hole,” which means that our temperature increases have not tracked with global changes. Instead, in our area, temperature increases correlate more closely with population growth and development, which really took off in the latter decades of the 20th century. Our most recent decade was the warmest on record, and the projection for the future is for temperature to increase at an accelerated rate.

Because we are an urban area, any temperature changes we experience are exacerbated by the urban heat island effect. This is a phenomenon which causes highly developed areas to retain heat and radiate it back into the lower atmosphere. As a result, urban areas experiencing this effect tend to be heavy energy users, for example as they consume electricity to run HVAC systems. This, unfortunately, may result in increased greenhouse gas emissions, which in turn contribute to warming. Thus the two issues are tightly connected and both require our attention. Read more about it here.