With a semi-tropical climate that brings warm temperatures much of the year, we South Floridians do not normally think of heat as a climate resiliency issue. Technology over the last century has provided the means for us to stay cool almost everywhere we go. Indeed, Florida’s population swelled because of the introduction of air conditioning. Yet, just as we are seeing changes in other climate factors, we are also seeing changes in temperature. Especially in cities, the evenings do not seem to cool off like they did, and we have fewer truly comfortable open-window days. 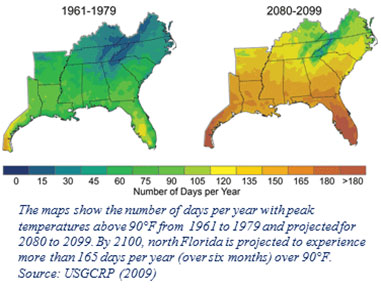 What Changes Can We Expect?

As with sea level, it is not the data on any given day or year or even decade that concern us, but instead the changes in long term patterns. For the foreseeable future, the patterns indicate that we will need to focus on temperature acclimation more than we did in years past.

Average temperature in Fort Lauderdale has risen about one and a half degrees Fahrenheit since 1880, and the hot season is almost three weeks longer than it was in the 1950s. (Read more about it here.) While we go through warming periods every few decades, an urban heat island effect, combined with other changes in climate, has in recent years exaggerated normal warming cycles and increased the likelihood of extreme heat and severe drought. The current projection is for a two to ten degree rise by the year 2100. What this means is that our hot periods become hotter, and our cold snaps colder. Our droughts become drier, and our rainy season becomes wetter, though the timing of the seasons we are accustomed to may shift slightly. Extreme weather events, while not directly caused by the warming, are amplified. Intense storms we would not expect to occur but once every 100 years are occurring with greater frequency.

Free viewers are required for some of the attached documents.
They can be downloaded by clicking on the icons below.