A greenway is a strip of land where vegetation is encouraged along with slow travel in the form of pedestrians, bicyclists, and in some communities horseback riders. Greenways can connect green spaces to each other, or follow established wildlife trails. A single greenway can run through many communities. Multiple greenways can be connected to form a regional greenway system.

A greenway preserves open space, provides a place for people to exercise away from traffic, links points of interest, and provides all the benefits of trees and vegetation. They can be showcases for green strategies by including bioswales, recycling containers, energy-efficient lighting, solar operated call stations, and benches or exercise stations made of recycled materials. From an ecological point of view, greenways are essential to keeping the ecosystem in balance in urban areas. They increase available food and shelter for animals, they connect one habitat to another or to a water source providing safe passageway, and they extend territorial range for animals which require it. Greenways can also provide safe resting points for migrating wildlife. 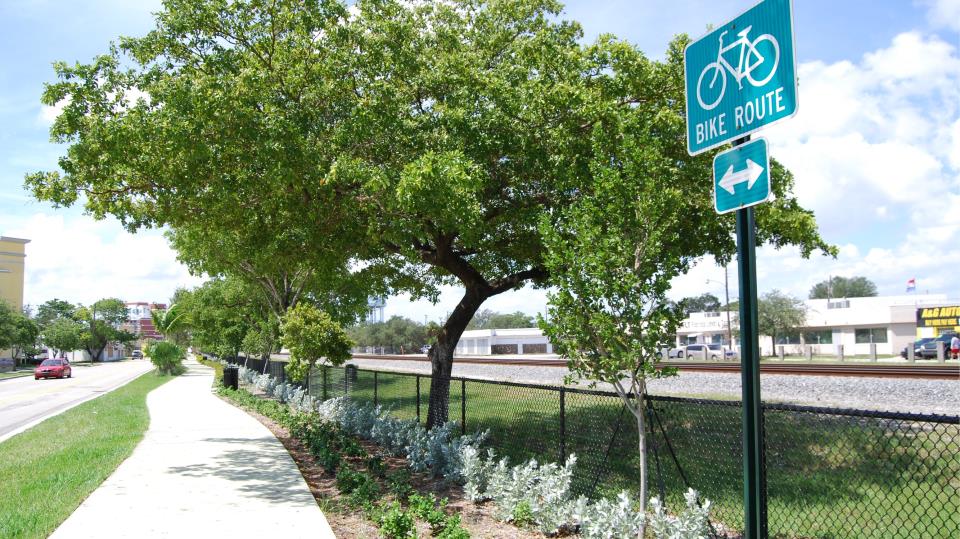 The City of Fort Lauderdale is supporting the implementation of the Broward County Greenways System, a planned countywide network of bicycle and equestrian paths, nature trails and waterways. There are eight priority greenways identified in the conceptual master plan, one of them being the Dixie Highway Greenway which runs through the City of Fort Lauderdale. On that segment, we have constructed the Flagler Greenway which follows the Florida East Coast Railway corridor on Flagler Drive.  The first phase of the greenway opened in March, 2012.  It stretches from Broward Boulevard to Sunrise Boulevard.

In Fort Lauderdale, this greenway project serves as an important first step in a larger multimodal connectivity process. The greenway will connect local neighborhood to our existing transportation system, providing safe and pleasant routes for people to get to Broward County Transit buses and the Sun Trolley. The greenway will also connect people to the B-Cycle bike share program currently in place.

Also in Fort Lauderdale is a portion of the Barrier Islands Greenway, which is being constructed in part along the A1A corridor from Hallandale Beach to Deerfield Beach.  The stretch running from South Beach Park to Birch State Park in Fort Lauderdale is complete. The Barrier Islands Greenway will include continuous multipurpose paths along the beach, the A1A roadway and through various neighborhood streets. It will link public beaches, resorts, waterside communities, activity centers, marinas, restaurants, municipal centers and other attractions.