Melaleuca was introduced into Florida in the early 1900's from its native environment of Australia to dry up the Everglades' swampland and transform it from "wasteland" to farmland. Because of its adaptability to a variety of growth conditions and resistance to damage by insects, disease and fire, it has spread rapidly in south Florida. The species most often invades after native vegetation has been disturbed by changes in drainage, fire or machinery. Even though trees can be cut down, their roots will sprout and develop seed-bearing trees in a short time. To complicate matters, when cutting disturbs melaleuca, seed pods dry out and release millions of very tiny seeds which germinate in 3 to 4 days after wetting.

Melaleuca is considered by many ecologists to be a major threat to the Everglades where it is encroaching into areas that used to have extensive sawgrass cover or other native flora. Unlike cypress and most other native tree species, melaleuca has little benefit to wildlife.

To date, an estimated half million acres of melaleuca are taking up South Florida precious marshland. In some areas there are stands of melaleuca as large as 50,000 acres. 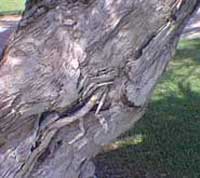 As late as the 1970s and 1980s, Melaleuca was recommended in horticultural books as, "One of Florida's very best landscape trees due to its tolerance of adverse growing conditions and resistance to pests." Melaleuca were anatomically and physiologically suited for either a well-drained or flooded environment, were fast growing, relatively inexpensive and many people like its shaggy trunk. Many of our older communities, including Victoria Park and the Southeast section, have a significant number of melaleucas.

There is still some controversy within the scientific community whether the flowers, which bloom several times per year (primarily in June, July, October and November), give off a chemical irritant called terpene. A smell like sour milk is given off and does seem to cause sinus and nasal congestion.

The Parks and Recreation Department has put into place a more aggressive melaleuca policy that has the approval of the City Commission. We will be targeting melaleuca trees growing on public property – parks, right-of-ways and medians – and replacing them with appropriate native or non-invasive species. We are asking homeowners to notify us of melaleuca trees on right-of-ways adjacent to their homes and tree maintenance crews will remove the tree and stump. Replacement trees will be provided with an approved under specie the Adopt-A-Tree Program funded by Tree Trust.

The Fort Lauderdale Parks and Recreation Department is starting a program to educate our homeowners on the importance of proper species selection and the replacement of melaleuca with more desirable trees. Please check back on this web site and the City newsletter for articles on tree removal, selecting an arborist,and appropriate tree and plant species to plant in Fort Lauderdale.

For more information on melaleuca, check out the following sites: