Beautifying our streets and towering over our homes, the Royal Palms (Roystonea sp.) that stand as majestic sentinels day in and day out throughout Fort Lauderdale are under attack by a red-eyed menace. Royal Palm Bugs (Xylastodoris luteolus) are very small insects that live high above in the crowns of the royal palms, literally sucking the life from the fronds. This gives a yellow or brown appearance to newly emerging fronds, which remains for the life of the frond. (see picture on left). But before we retreat in fear or dare to think of ridding our city of these magnificent specimens of the palm world, there is much we can do to help these splendid palms defend themselves.

First, we must realize that infestations of Royal Palm Bug are rarely fatal to the palms. Actually, our royal palms face royal palm bugs every year and in most cases the insects just make a few fronds look ragged for awhile. The Royal Palm Bug population is higher in years with a mild winter. That's why you will also notice more of a problem as you move toward the beach, where warm ocean breezes make for delightful living conditions for the insects. But what can the homeowner do to alleviate a problem that is sometimes 60 feet above the ground?

The best plan of attack is to maintain healthy palms. A healthy palm (see picture below right) is less likely to succumb to one source of stress, such as the Royal Palm Bug. A regular fertilization program is one of the best starts to having a healthy palm. South Florida's sandy soils and heavy rainfall combine to leave little resources from which mature palms can draw nutrients. 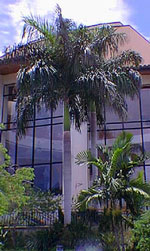 A good fertilization program for royal palms above 30 feet tall would be 15 pounds of "Palm Special" fertilizer four times a year. Palms shorter than 30 feet should receive about 1 pound of fertilizer for every 2 feet of overall height. The fertilizer should be evenly distributed along the root zone of the palm, but should not touch the base of the palm. Remember that palm roots extend many feet from the base of the palm. The fertilizer should have equal amounts of nitrogen and potassium (some of both in slow-release form) and about 1/3 of that amount in magnesium. Regular fertilization is a very important part of a palm maintenance program.

While environmentally safe products are being developed, there are a few chemical methods to attack the Royal Palm Bug. None of these methods are available to the homeowner; they must be contracted through an arborist who is a state-certified pesticide applicator. Chemical methods should only be used in severe infestation cases.

Homeowners should also protect their palms from injuries. Lawnmowers, weedeaters, and car bumpers can do irreparable damage to palms. The driving of nails, staples or screws into the palms to mount signs result in wounds. Palms do not "heal" or callous over wounds so injuries can become permanent openings for insects and decay. Royal Palms naturally grow in wet areas, so they love extra irrigation and should be watered during drought periods.

Fertilization and a little extra care can increase the health and life-span of our Royal Palms so that they can provide many, many years of beauty and are more resistant to insect and disease attacks. If you have any questions please contact Mark Williams, the City's Urban Forester, at 954-828-5785, or MAwilliams@fortlauderdale.gov.